The F35 Joint Strike Fighter: possibly the biggest waste of money ever spent on a defence procurement? 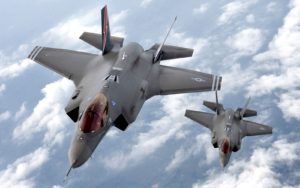 The first F35 Joint Strike Fighter was delivered to the Italian Air Force a few weeks ago. The aircraft, developed by the American company Lockheed Martin, has also been purchased by the UK, Australia, Japan and Israel among others. The UK is purchasing 138 F35Bs. Australia is committed to 100 F35As. Italy is buying 90 F35As.

It was sold as a “common” platform that would carry out any role for any service, American or Allied. For anyone with the slightest knowledge of basic engineering this claim should have immediately raised big suspicions. Indeed the “common” platform is anything but.

The USAF version (the F35A) is the “cheapest”. It is billed to replace the F16’s role, a remarkably successful – and relatively inexpensive – platform that was built for one or two roles and generally these were mutually exclusive in terms of payload and aircraft configuration: ground/air attack and reconnaissance. The F35A has just over half the weapons and avionics payload of that venerable old aircraft. So far the USAF version is said to cost USD 148 million (empty, i.e. with no weapons on board). In 1988 the USAF purchased the first F16As for 18 million apiece. Recent variants (loaded with far more weaponry and avionics than the F35 can carry) were sold for around USD 100M. The F35A is the version the Italians purchased and the cost of their platform is 200M Euro per unit. The difference in price could be due to slightly different variations of the avionics suite.

The US Marines version of the “common” platform is in fact a completely different one as the Marines “needed” a STOVL capable platform (short takeoff / vertical landing) to replace the AV8B Harrier II they have now. Aside from wondering why there is even the need for the Marines any more, who last saw a standalone military engagement in the Korean War (they have been in battle with the combined assistance of the US Army, Navy and Air Force ever since), the USMC’s requirement meant that Lockheed Martin had to build a completely different platform. It carries a third less fuel than the F35A, is heavier and has a different power plant system, required for vertical flight. It costs USD 250 million without on board weaponry.

But the winner in terms of cost is the F35C designed and built for the US Navy requirements. USN pilots land, or rather, slam their aircraft on carrier decks and then power up their engines in case they miss the landing. Arrestor wires trap the airframe as the plane is in full throttle, with all the dynamic stresses that puts on the airframe, and subject it to huge g-forces to stop it. For that Lockheed Martin needed to build a third completely different version of the “common” platform. Carrier landings and takeoffs require a strengthened airframe and bigger lifting surfaces (wings and tails). So far the cost of a single F35C is a staggering 337 million USD. This is just 2 million shy of what the F22 Raptor costs, which is a twin-engine aircraft with similar stealth capabilities, but is faster, has a longer range and better payload capabilities. It is also significant that this is the first time in decades that the US Navy has purchased a single-engine top of the line fighter aircraft. Operations at sea have traditionally required the use of twin-engine platforms such as the F18 for safety reasons: if one engine fails the second one can carry the aircraft and its pilot back to a landing area. An engine failure in flight on the F35 will result in at least the loss of the aircraft, and put the pilot’s life at risk.

Thus the “common platform” statement is a myth. The three variants are so different from one another that the only commonality is, to some extent, in the cockpit (although the flight controls of the F35B are different still). It has been suggested that at most the three variants have a 20-25% commonality. Thus any cost savings that were supposed to have been achieved in developing a common platform for different users are arguably a moot point.

There’s more to be concerned about. The prices above are only indicative of the production costs (that in any case seem to double every three years – the Italian Air Force F35As were supposed to cost “only” 100M Euro each in 2014!). So far the R&D costs (that have been and will continue to be charged back to the taxpayers in the countries that are buying the system) are estimated to be well over USD 400 Billion. These have not been loaded on the cost of each aircraft, but have been spread out through different American and other countries’ defence budgets. That might be a low estimate though. Depending on what is counted towards the development of the F35, figures of over 1 trillion dollars for the lifetime of the project have been suggested.

The operational costs are another area of concern. The cost per flying hour of an F16C (latest version with weaponry) is estimated at USD 22,000. There is very little information on what the F35 costs per flying hour will be but in 2015 these were estimated to be USD 42,000 (F35A with no weapons). What they are now, and what they may be for a fully loaded platform is for now unclear. Flying hour costs are determined more accurately over longer periods of use, as that allows for a better understanding of sparing and repair costs. It is certain that the aircraft will cost much more than anything in anyone’s arsenal today, as replacement part cost effectiveness won’t be achieved for quite some time.

But the excesses in money wastage go even further. Lockheed Martin has made this programme cancellation-proof by assembling parts of the platform in every single US state except Alaska, Hawaii, Nebraska, and Wyoming to ensure that if the project is threatened in any way, local politicians will support it as much as the national ones who fostered it through in the first place. The company has outsourced parts of the programme to the UK, Italy, the Netherlands, Japan and Israel as well. So to make sure the project would not be cancelled by spreading out the construction of the aircraft so far and wide, Lockheed Martin has made the production about as inefficient and wasteful as it could possibly ever be.

On the plus side proponents of the F35 system argue that it is most advanced air superiority platform ever built and it should allow the US and it’s allies to dominate the skies for decades, particularly in a climate of renewed tensions with Russia (the incoming US administration notwithstanding) and a much more assertive China. However this belief is also debatable. Yes, the F35 stealth capabilities are quite good, and today would present a problem for Chinese and Russian radars. However the gap is narrowing and there is technology available (even though not yet in production) that will allow an F35 to be visible from the ground or from space. Even today an F35 can be detected at short range. Longer-range detection will arguably be available well within the lifetime for the aircraft. Ground based radars will probably be capable of picking up an F35 signature within the next few years, and even if fighter mounted radars won’t (any time soon), ground defence systems will be able to direct them to their targets. But stealth isn’t the only thing on which the F35 should be evaluated. Weapons delivery in active combat has yet to be tested. The integration of a squadron of F35s with other managed assets in the air, on land and at sea is still far off from having been tested satisfactorily, and in network-centric warfare (which is how battles are conducted today) that is the main value of the F35 system. Thus we have no idea if and how the F35 systems will perform in such conditions, despite the massive development and production costs to date.

But finally, and maybe most importantly, the F35 will do nothing against the threat we still have few ideas on how to counter today: the person who hijacks a truck carrying steel beams and drives it through a crowded Christmas market. It is interesting to think of how much could be achieved in countering such threats if the money that one F35 costs today was instead spent on intelligence gathering.