The delights of strange food 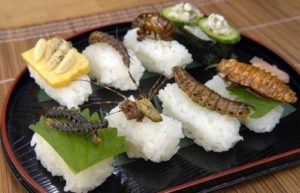 I once had a job that required travel. A lot of travel. This gets boring fast, I assure you. But there was one aspect of my job that required me at times to be in Indonesia on Monday, Tokyo on Wednesday and Bangkok on the weekend, that made the boredom and annoyance of airport lines and missed bags at the carrousel, reasonably bearable: I got to eat different food in all my stops. For instance, at times I would be in Tokyo feasting on Kobe beef Teppanyaki, which, for those of you who are unfamiliar with this dish, is hot-plate grilled beef, of such a succulent taste and texture that you can slice it with your tongue. The beef comes from a cow that has been fed on beer and massaged! This gives the meat an intricate marbling of fat, adding great flavor and resulting in an extremely soft texture. You eat it with a variety of sauces (sesame, soy, chili) and with thin garlic slices that have been cooking on the grill until they are crisp as potato chips. I didn’t get to experience such dining luxury often, but I certainly made count the times I did.

I certainly have had some interesting eating experiences in Asia. I have heard the saying among expats that the Cantonese will eat anything with four legs that isn’t a table and anything with wings that isn’t a plane. I’ve had snake in Taiwan, but it didn’t do much for me: the meat is similar to eel, and that is standard fare in Japan. It isn’t a dish that I would seek out, but it is edible. On the other hand I was offered live baby octopus in Korea, which I think was an attempt on the part of my hosts to gross me out (Koreans are like that, I have found). I was young(-ish) at the time, so I felt I had to respond manly to the challenge and set myself in “food processor” mode: I think I started chewing before the critter, still twitching on my chopsticks, entered my mouth! In Thailand it is a common sight to see fried insects on offer in street stalls. Whereas I have never been tempted to try them (not even as a dare – with age you get wiser about these things), my wife did point out that I happily eat lobster, and they belong to the same family as insects (she eats neither, I should point out). I think a large part of our enjoyment of food is mental, and presentation and attitude weighs heavily on our perception of what a good meal should look like.

And speaking of lobster, seafood is particular treat in Thailand. In Thailand we have a much smaller variety of lobster than the Atlantic ones you get in Maine, but they are just as tasty. They are fished off the island of Phuket, in the South of the country. I have seen them (although not collected them) many times while scuba diving there. In Thailand we barbecue lobsters and combine the tails in a kebab with squid, onion and capsicums (green peppers). The meat is dipped in a spicy sauce made of crushed chilies and garlic, lime juice, fish sauce and a sprinkle of sugar. You might think that this sauce would be too strong for the delicate taste of lobster meat, but in fact it complements it nicely. Like in most Thai dishes the combination is designed to bring out the freshness and texture contrast of all the ingredients.

But as much pleasure as I can got eating out at an expensive restaurant (and even more deliciously, on someone else’s credit card), the best meals I always remember are those that either myself of my wife prepare at home, or those we eat at cheap family restaurants in Bangkok, where I live. Thais love food. They have a unique style of preparing it that involves very little cooking, so that the flavors of the herbs and spices they use are always distinguishable separately in your mouth. Also some of the best dishes aren’t even cooked! Try this for a taste explosion: in Thai it is called “Som Tam”; a green papaya salad mixed with anchovies, lime, chilies, garlic, coriander, fish sauce and crushed peanuts. You slice an unripe, green papaya in long, thin strips. Then you combine small fresh chili peppers and garlic cloves in a mortar, and crush them with a pestle. This is actually a base for many Thai dishes. The crushing action of the pestle releases the juices of the garlic and cracks the seeds of the chilies, so that the flavor of both ends up combined in a delicious pulp. Then you add some anchovies, fish sauce, coriander and peanuts to the mix and keep working the pestle for a minute or so, to get a nice spicy mixture. To contrast the salty and spicy taste of this, you then add half a cup of freshly squeezed lime juice, and toss everything in a salad bowl with the shredded papaya. That’s it. The contrast of flavors is delicious. You taste the saltiness of the anchovies, the heat of the chilies, the sharpness of the lime, the warmth of the garlic, the twang crispiness of the papaya, the slight bitterness of the coriander and the crunchiness of the peanuts, all in one delicious mouthful. What a dish! And, although this is considered a poor man’s meal because it is made from some of the cheapest ingredients you can buy in Thailand, it is probably one of the best.